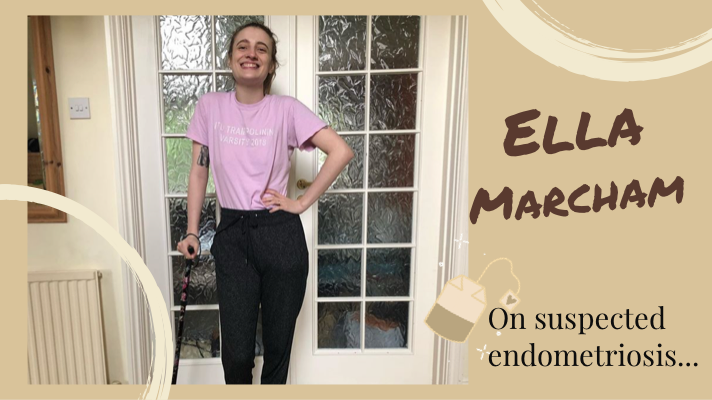 Endometriosis affects one in ten women in the UK. It’s also the second most common gynaecological condition in the UK. Yet it still takes women seven and a half years for women to get a diagnosis and doctors often don’t recognise symptoms. But in what ways has lockdown disrupted diagnosis timescales further?

Periods? A lot of women endure them throughout their lives. The feeling of never-ending cramps, the nausea, the sweating and the hassle of changing sanitary products every couple of hours can all form part of the cycle. The NHS website explains that period pain is “usually felt as painful muscle cramps in the tummy, which can spread to the back and thighs”, which can come “in intense spasms, while at other times it may be dull but more constant.” But scroll a bit further down and the website explains that “period pain could be caused by an underlying medical condition”, such as endometriosis.

On 27 July, 22-year-old Ella Marcham posted her first photo on her new Instagram account, @ellas_endo, dedicated entirely to her suspected endometriosis journey. Although she is waiting for her diagnosis later this month, Marcham wanted to reach out to other women suffering from the condition and to raise awareness about the UK’s second most common gynaecological condition.

The caption on Marcham’s first post read: “My name is Ella, I’m 22 and living with suspected endometriosis. When I learned that endo affects 1 in 10 women and that it takes a staggering 7.5 years to get diagnosed, I instantly wanted to raise awareness. Only 54% of people have even heard of endometriosis, let alone know what it is! That makes me so sad.”

Marcham told Spill the Tea: “I’d never really heard of endometriosis. I think a lot of women are just told, ‘bad periods are just part of being a woman’. Mine was so bad that I was bleeding really heavily, I was being sick, fainting, I was missed days of school and, later on, days of university. The last year or so, it became more of a problem to the point it was interfering with my life.”

The NHS website explains that endometriosis is “a condition where tissue similar to the lining of the womb starts to grow in other places, such as the ovaries and fallopian tubes.” Whilst the website delves further into the physical side effects of endometriosis, there appears to remain a barrier to women being diagnosed. Charity Endometriosis UK even provide a consultation questionnaire which women can present to doctors during their appointment. But when did self-suspected diagnosis become the driving factor behind women’s issues being heard?

Perhaps the issue is language. If only 54% of women – and a shocking 74% of men – do not even know what endometriosis is, perhaps it is time we look more closely at the language surrounding this. Whilst an outdated relationships, sex education (RSE) and health education curriculum has been revised for schools opening in September 2020, perhaps it is also time we revise language which may isolate people from understanding the gravity of sex-specific medical issues.

Endometriosis UK echo this logic – “a lack of education in schools is contributing to societal taboos in talking about female health.” Marcham expanded on this, saying: “I think also a lot of the problems endometriosis causes are taboo topics. They shouldn’t be, but for a lot of people they don’t want to talk about it as much.”

How does endometriosis affect everyday life?

Endometriosis does not stop at physical symptoms – Endometriosis UK say it can also have “a devastating impact on a woman’s education, personal and professional relationships, mental health, and quality of life.” For women wanting to pursue motherhood, this can put a particular strain on relationships due to potential infertility issues associated with this. Marcham explains although it’s going on in your own body, you feel like you don’t even know what’s happening to yourself.

It can be a debilitating chronic illness and, although Marcham is waiting for her official diagnosis, her illness has meant she’s already made huge alterations to everyday life. As she now struggles to get up the stairs in her house, her family have had to move a single bed downstairs into their study. Marcham suggests this is particularly difficult as she can’t sleep in the same bed as her husband, who is helping her out in a number of ways – from carrying her upstairs for a shower, to preparing her own food, to helping her get dressed in the mornings.

Marcham explains that she has a a walking stick to help when she’s out because she struggles with walking and her mobility now. The pandemic and her illness has meant that she hasn’t left the house in the last four months, other than going to medical appointments. To try and lift her spirits and feel revived, Marcham booked a hair appointment. But even this was “a really tough day.”

Like many people, her hairdresser didn’t know much about endometriosis, but was really understanding and made adjustments on the day. Marcham said that her tailbone swelling caused her a lot of agony for the rest of the day, but that it was a “small victory being able to go out of the house and do something fun.” She now won’t be able to leave the house for a few weeks as as she enters pre-operation lockdown.

As with most surgeries, operations and medical appointments, endometriosis diagnosis’s and surgeries were backlogged at the beginning of lockdown. Endometriosis UK stated that “the vast majority of endometriosis surgery will be classified by the NHS as non-urgent ‘elective’ surgery”, meaning many with surgery booked will most likely have their dates cancelled or postponed.

The average time for someone to get diagnosed is a shocking 7.5 years, due to the way it can be present in “a variety of ways and shares symptoms with other conditions.”

Marcham explained that she opted to go privately after being in so much pain and without much progress. She said “sadly, in a lot of communities, going privately is the consensus.” But even when doing that, she has had to wait two months for her surgery, which would normally be a couple of weeks privately.

“Due to the wait times, partly due to Covid-19 and partly due to NHS difficulties, I’ve gone down the private route so that things would speed up a bit. I had a FaceTime call with a specialist and I’m now I’m just waiting for my surgery.”

What advice does Marcham give to those worried about similar experiences?

Marcham encourages anyone experiencing this kind of pain to go and see a Doctor or a specialist and to advocate for yourself – “do not take no as an answer,” she says.

She is honest about the process and says that it can be tough emotionally: “Learning that it could be a diagnosis that’s not really got a cure and that it can affect your fertility is a daunting prospect as I quite want to be a Mum. I went through the five stages of grief with it because I was in total denial with it to begin with. After that, it was more about realising and accepting it. Now I’m at the point where I want to shout about it because it’s so underrepresented, but so common.”

Her Instagram account has also provided a huge amount of support from others in the community, acting as a digital diary. Comments came flooding in on Marcham’s first post, expressing their support and how they hope she finds the answers she is looking for. When she felt lonely at different points of her journey, the Instagram endometriosis community were a good soundboard for her queries.

“When your pain has been put down as invalid, it’s really invigorating to run such an account and to feel you have people interacting.”

The discrepancy between the number of women affected by it and the number of people understanding what it even is highlights one factor –women need more education on this. Perhaps it’s time we close the door on taboo surrounding it and wedge the door open to period-related topics that are affecting 1.5m of females in the UK. Period.

Helplines for those affected by these issues: